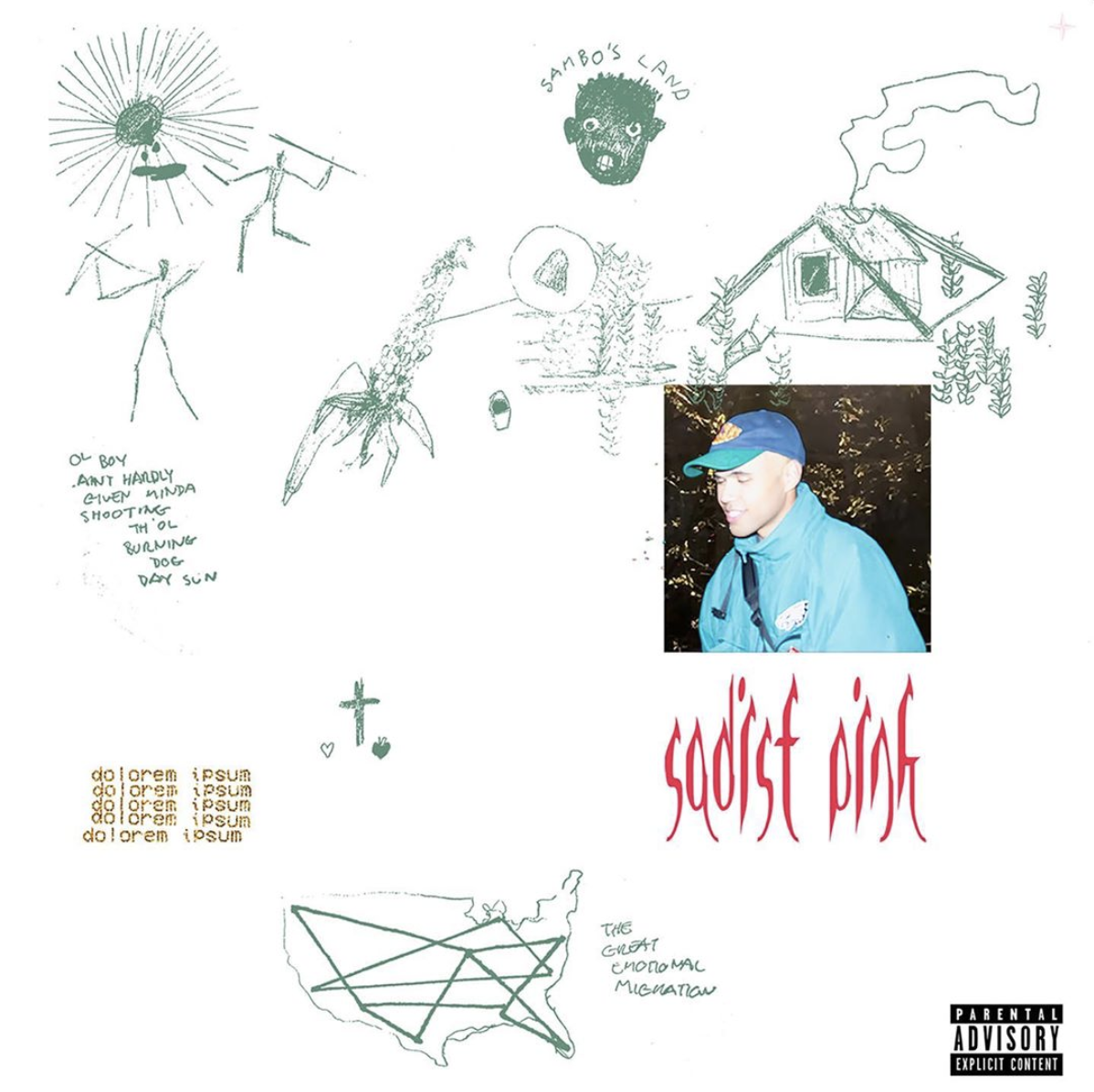 With the drop of Sadist Pink’s debut album Dolorem Ipsum, I got a chance to do a little Q&A with him about what it’s like to be making and releasing music while the world continues to cave in on itself.

Firstly how are you and what have you been spending your time doing amidst this pandemic shit?

I’ve been doing good, thanks. Most of the time I’m catching up on schoolwork and just generally worrying about the state of the world or being misanthropic, so nothing too far from the usual, I guess. In my free time, I’m going into work alone at the local community garden and reading a bunch. Aside from being far from friends, I’m very appreciative of how lucky and safe I’ve been.

How do you feel about dropping a project right now?

There’s a little guilt about the timing…it’s a wild feeling to be promoting my work at a time like this. But simultaneously, this album is all about the ‘end of the world’ ideas and emotions that I’m usually dealing with, so it also feels like there’s no better time to release these songs.

Where are you from originally/where do you live now?

I’m from Trenton, New Jersey and that’s where I’m at right now.

What kind of music scene did you get introduced to early on? And who put you on?

I started just going to Philly noise and DIY shows a while back in high school, but I haven’t been deep into that recently, I guess. It’s a long-ish drive from Trenton. I guess I just stumbled into it.

When did you start making music?

I’ve been making my own music since around 2013-ish, but I’ve been playing instruments since I was young.

What did your first stuff sound like? How much has it changed since then and how so?

My earlier stuff was definitely way less put together. I was working off GarageBand and just fucking around with an amphead and a looper pedal in my room. It was all very glitchy and slow and dark, so I guess my stuff’s gotten more formal and less repetitive, but I’ve really been down for the same general vibe.

It sometimes starts on the piano in my house or a guitar, where I might come up with a melody, but usually, it just gets going on my laptop. I usually just post up in Logic software for a couple hours on the porch and just work on a beat and vocals. I come up with something I like and then let it sit for months on my computer before I ever re-record vocals on my microphone upstairs. It’s a long process with no guarantee of success. I’ve got way too much music just sitting on hard drives. Maybe I’m just lazy.

Tell me about your name.

I just liked the sound of the two words together. It’s jarring but pretty.

When people listen to Dolorem Ipsum, what kind of environment do you suggest they be in?

Hmm… I think being on public transit on a rainy day makes this project sound 10 times better but I suggest they dodge that fare tho.

Was there a conceptual bottom line going into this new project?

Going into this project I was thinking a lot about how I feel very chaotic inside most days and I almost always see that chaos mirrored by the outside world. It’s such a struggle to see beauty in the world’s violence. I’m always wondering what finding peace looks like in a broken world and if that peace will always just be escapism or ignorance. And how do we justify finding that peace? Imma stop myself before I start a philosophical monologue.

How long did this project take?

It’s been a while. At least a year or so now.

Music is and has always been a great place for me to process what I feel and think. It gives me ways to dissect myself and the world around me that I think are crucially important. Only recently have I been thinking about how others relate to my music, which is weird because it’s always been such a personal experience for me.

Who are you inspired / who do you listen to at the moment?

My mom was always bumping Sade when I was young so I think she’s my biggest influence for sure, and then there were Bjork and Toro y Moi too. These days I’ve been listening to lots of Yves Tumor, Ecco2k, Jessica Pratt, and Oneohtrix Point Never.

Who did the cover art? I’m a fan

Thanks, it’s just something I threw together.

Do you have a favorite track on it?

I think ‘Esc’ sums the project up the best.

Where can people listen/stream when it drops?

The album’s up on Spotify and Apple Music but there’s also a music video for ‘Of Desire’ up on YouTube.

Can we look forward to any shows or live performances when things calm down?

Ahhh, I’ll give that a maybe. That shit makes me mad anxious, but we’ll see.

Any shout outs or last words?

Shoutout to my friends for their love, and Noam Chomsky. Plus shoutout to you for this interview, right?