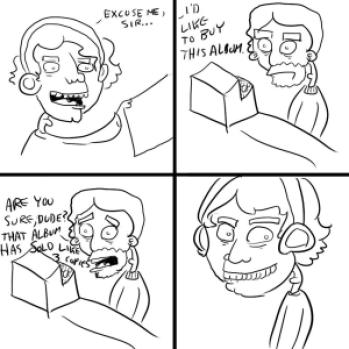 It’s Christmas time for the Western world: the time for folks with way too much white privilege to go out drinking in the streets while families go out and fill their voids with vapid consumerism. This is also the time for year-end lists, where savvy music listeners seek out top album countdowns that most fit their already set tastes in hopes of some vague form of reinforcement. In response to forgettable sad boys with guitars singing about marijuana cigarettes and aimless feelings, here is a brief list of the top 10 records that you slept on in 2014:

Four tenor saxophones. Circular breathing musicians. All playing at once. Weathered jazz musician Travis Laplante (Little Women) woke up from a dream to assemble a quartet with three musicians he had never played with before and record an album based on spiritual meditation and eastern healing. The results are astounding. There is nothing quite like this record, the best way to describe it is picturing Terry Riley and Pan Sonic meeting each other outside of their local spiritual acupuncturist on a windy autumn morning. Rhythm and melody rise from obscurity and cacophony to form beautiful moments, only to be consumed by the noise once more in a matter of seconds. Palace of Wind is an experience, and it is not one to miss. [youtube https://www.youtube.com/watch?v=FMoctGlH-rM] 2. Giant Claw – Dark Web Vaporwave might have faded back into the vast ocean of the collective unconscious, but that has no bearing on the dark, moody beats of the new album from Giant Claw. Roland 808s fuse with echoes of public domain pop music you once overheard that time you found yourself lost in a shopping mall. At once exultant and foreboding, Dark Web challenges the listener to grow comfortable with its dance floor beats before tearing them away with samples from an all-too-familiar past. [youtube https://www.youtube.com/watch?v=OGjoRWZKyIU] 3. Rind – Understudy Mastered by breakcore legend Lauren Bousfield (Nero’s Day at Disneyland, Strip Mall Seizures), Rind’s newest work lives up to its underground pedigree in every way. Eerie, hungry, and downright vicious are apt descriptions for Understudy’s raw, constantly undulating sound. Reminiscent of Karin Andersson (The Knife, Fever Ray, Emperor God Queen of Mankind), Lee Ralva’s voice is a force to reckoned with, shapeshifting and surprising at every turn. [youtube https://www.youtube.com/watch?v=RWumAsXDOr4] 4. Ancient Astronaut – Ancient Astronaut A dance record for the end of days. Ancient Astronaut’s debut seamlessly blends noise, drone, and dance in a pleasant panoply of beats. Ancient Astronaut is also one of the newest members of Nicoals Jaar’s (Darkside) subscription based label, Other People, which has seen acclaim for its wide array of exciting new electronic artists. [youtube http://youtube.com/watch?v=e8MqPGYo60Q] 5. LE1F – Hey The remaster of 2012 breakout hit “Wut” is worth the price of admission alone for this fire EP from Concord Academy/Wesleyan University trained dancer Khalif Diouf. The production hits harder, the punchlines cut deeper, and LE1F’s flow continues to evolve further into a force exceeding any rapper on the scene today. With a rumored full length for early 2015, this EP best serves as a reminder to keep LE1F on the radar as he continues to blow up. [youtube https://www.youtube.com/watch?v=Nrnq4SZ0luc] 6. Have a Nice Life – The Unnatural World Follow-up record to the 2008 masterpiece, Deathconciousness. Reuniting Dan Barrett (Giles Corey) and Tim Macuga (The Flowers of St. Francis, Nahvalr) for more sadass jams emanating from what sounds like a god forsaken cave at the end of the earth. World takes its listeners to a former youth mental asylum before launching them out of a sonic cannon into outer space with an all-out lo-fi assault on the listeners. Check out this track about how having emotional expectations is akin to the act of murder by being thrown out of a window below: [youtube https://www.youtube.com/watch?v=p4RBHCsLLI8] 7. XiuXiu – Angel Guts: Red Classroom [youtube https://www.youtube.com/watch?v=cJGz83m5lzk] 8. Oneohtrix Point Never – Commissions Daniel Lopatin has had quite the busy year. Not content with touring in place of Death Grips on the Nine Inch Nails summer tour, Lopatin also opened a boiler room set for Hudson Mohawke & Lunice and performed a live rendition of an all-new soundtrack he composed for the classic anime, Magnetic Rose. Commissions is a short EP clocking it only three tracks, but the sweeping choral pads and deep drones are sure to win over any jaded electronic erudite. The record delivers stunning aural landscapes and panoramic vistas at every turn, sure to leave the listener with a tantalizing slice of oneness with the universe by the end of twenty minute run mark. [youtube https://www.youtube.com/watch?v=g4Nz1EXysMI] 9. Swans –To Be Kind Not exactly slept on, but still demanding of a mention, To Be Kind is the second post-reunion record of industrial trailblazers, Swans. Annie Clark (St. Vincent) cameos throughout the record to provide powerful noodling behind Michael Gira’s intense performances depicting scenes of suffocation, death, and decay. Swans is a band that would cave roofs in while playing gigs in the 80s. The energy is still there, and the band shows no signs of slowing down their abrasive, glorious sound any time soon. Swans has been touring extensively behind their latest releases, so be sure to catch them if they are nearby, their live shows are known to be test-beds for improvisational new material. [youtube https://www.youtube.com/watch?v=1jSdTBGhDSg] 10. Poemss – Poemss Aaron Funk (Venetian Snares) teamed up with Joanne Pollock for this mid-year collab project. Pollock whimsical style takes the forefront here, but is deeply enhanced by the more eccentric elements of the typically harsh Funk’s production. The result is a relaxed record that explores elements of 90s jungle in a noncommittal, non-confrontational manner, lovely for the winter time. [youtube https://www.youtube.com/watch?v=e0-xtoGhEnc] is our current Music Director and hosts the weekly program Jet Set Radio